Climbing Kilimanjaro via the Western Breach

The purpose of this site is to provide an opportunity for readers planning to climb Kilimanjaro to assess for themselves whether the obvious risks associated with assaulting Kilimanjaro via the Western Breach are personally acceptable, or whether a preferable decision would be to opt for an assault via the Barafu Ridge instead.

Creating a safe route up the Western Breach 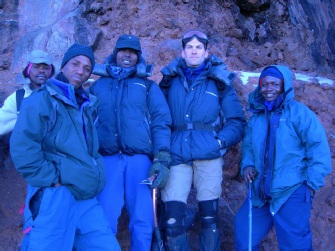 John Rees-Evans with representatives of the park authorities, leading the second accident investigation into the accident in January 2006 that killed three climbers.

The creators of this site have been integrally involved in accident prevention and route variant selection on the Western Breach, and naturally receive many enquiries pertaining to use of the route.

The Breach is however a complex and changing environment and we welcome discussion of the route, particularly from climbers who have climbed the face, and from those intending to climb it. Those intending that other climbers should benefit from their feedback are invited to post their photographs and discuss their own perspectives, on our Facebook page.

Deciding whether to climb Kilimanjaro via the Western Breach

Regardless of whether it is your intention or not to climb the Western Breach, we believe that this website currently represents the best resource available for those wishing to gain a thorough understanding of the route and its risks.

Threat of accidents and deaths on the Western Breach 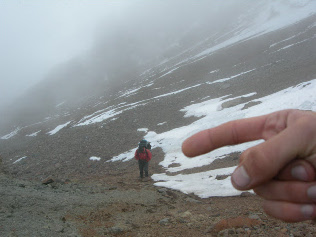 There have been several accidents on the Western Breach in recent years, most of which have occurred between 5,000m and 5,300m elevation (not at Arrow Glacier Camp as the media has sometimes erroneously reported).

The most unfortunate of these accidents occurred in January 2006 when rockfall dislodged from the base of a glacier on the face, fell some 150 metres, impacting and killing three climbers.

Investigating the 2006 Western Breach accident under the auspices of TANAPA

Continued risk of rock fall on the Western Breach

It is our belief that now that the Western Breach has been re-opened, we should expect the possibility of further accidents. The primary reasons for this belief are that:

The r-shaped glacier from which the rocks fell in January 2006 continues to recede and to release more rocks. The fall-path of these rocks inevitably intersects the climber’s ascent route in at least two locations, regardless of how the route is constructed.

The principle of indemnity and function of informed consent when climbing Kilimanjaro. 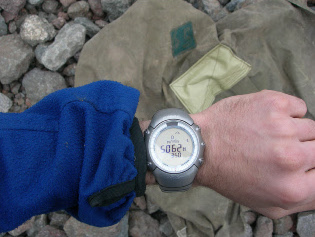 Prospective climbers should be advised that neither KINAPA, TANAPA nor any climb organiser with which you may book your expedition are liable to bear any responsibility for accidents that may occur on Kilimanjaro. In all cases climbers are required to undertake to commit to their expeditions on the basis of informed consent and in acknowledgement of the fact that an ascent of Kilimanjaro entails potentially fatal objective risk, that is, risk that cannot be controlled by you or your climb organiser. Climbers should also note that the level of objective risk associated with the Western Breach assault route is considered to be conspicuously greater than on the two alternative assault routes.

Some viewers to this site may remember that we originally published a second reason why we felt that the Western Breach continued to pose significant risks to climbers. We originally expressed the following concern:

b) the alternative route that has been opened with the aim of evading rockfall now presents a new risk of falling. This is clearly illustrated in the image directly behind this text, taken on the southern side of the Stone Train where the new route is required to pass.

This risk is illustrated in the video👇

Further videos recorded on the Western Breach in 2006 that describe some of the issues on this page, are available to view here.

While it was originally the decision of the authorities to route the climb around what we contended was the ‘wrong’ side of the Stone Train, we are relieved to be able to report that this decision has subsequently been reversed, and our recommendation to adhere closely to the (ascending) left side of the Stone Train has been endorsed.

While it is well received that the ‘official’ Western Breach route follows the report’s recommendations as regards the details of the new route, we nonetheless urge ongoing caution particularly because:

A) the route remains prone to rock fall in at least three places. Each of these ‘kill zones’ can be crossed quickly, minimising exposure to risk, however it is of course possible that rock fall can impact a climber even while crossing these small zones quickly,

B) while the authorities are able to prescribe the ‘correct’ route, to date they have been unable to erect the instructional signs and guidance notes along the ascent that we recommended in our Western Breach accident investigation report, and which would be required effectively to proscribe access to locations which the old route incorporated, but which are demonstrably highly risk-prone. This omission therefore allows significant scope for error where a guide that works for an operation whose experience of the face is perhaps slight, is concerned, or where an experienced operation employs either an inexperienced or incorrigible guide.

Proposed configuration of assaults on Kilimanjaro via the Western Breach

While we are unable to recommend the Western Breach as a safe assault option, climbers and operational coordinators are asked to consider the following recommendations for route configurations:

Proposed timings for safe use of the Western Breach 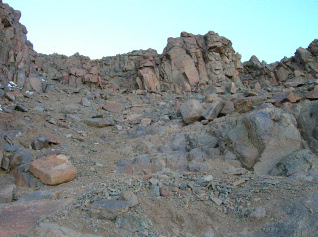 Illness and injury: optimising safety of evacuation from the Western Breach 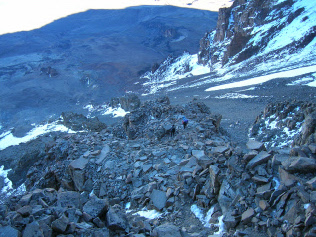 A) a climber succumbing to cerebral oedema (or in some cases, even severe AMS) can be expected to suffer ataxia; a loss of co-ordination that would create a new and substantial risk of tripping and falling.

C) the potentially fatal added risk compounded by the likelihood of slipping, tripping, falling or suffering substantial delays while descending the Western Breach, far outweigh the risks associated with gaining an additional 150 metres in elevation before being in a position from which rapid descent is possible. That said, if a sick climber has more than 200 vertical metres remaining before attaining the top of the crater wall then the risks associated with descending the Breach should be considered less than those associated with prolonged exposure to extremely high altitude and further exertion when already in a critical condition.

Recommendations concerning the use of the Western Breach of Kilimanjaro 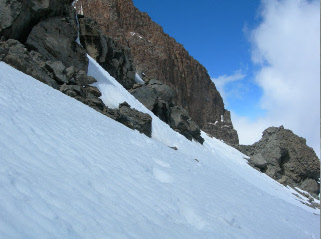 It is no longer necessary for climbers to traverse diagonally across this steep and exposed slope pictured above, a component of one of the proposed routes that we have always contended is very dangerous for inexperienced climbers to undertake.

As already discussed elsewhere, we believe that with the continued recession of the prominent r-shaped glacier beneath the crater wall, the incidence of rockfall that will affect the exposed section of the route at 5,080 metres, will increase, especially as the efects of climate change accelerate glacial melt rates from time to time. 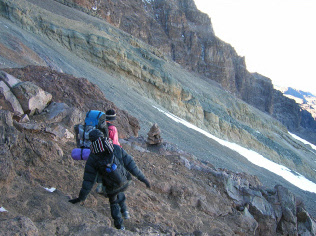 We have always believed that opening the southern (right hand) side of the Stone Train exposes climbers to an unacceptably high risk of falling, when considering that an alternative assault route may instead be used. However, for several months the authorities opposed this view, following early recommendations offered by guides working for the company that led one of the groups whose members were killed on the climb.

Subsequent to this initial disagreement, the authorities have come to concur with us and have discontinued this option. However, we keep this recommendation detailed here in the event of any change in leadership within the relevant governing authorities. 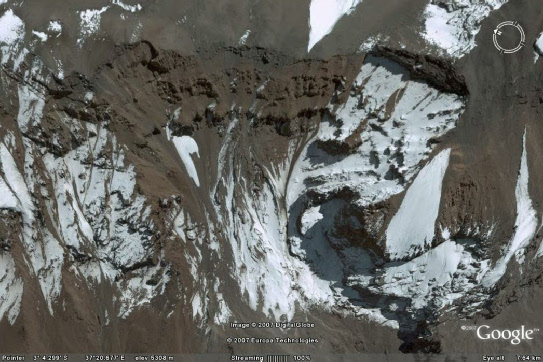 While the Western Breach affords a uniquely dramatic vantage over the Shira Plateau and offers the best views westwards of any route that is publicly accessible and sanctioned by the authorities, we nonetheless consider that these benefits may be outweighed by the route’s considerable risks and the many complications associated with evacuations from the Western Breach, and therefore advise climbers wanting to see the Western Breach and enjoy views over the Shira Plateau to instead incorporate a crater excursion into one of the other available routes on Kilimanjaro, such as Team Kilimanjaro’s Excel Series. 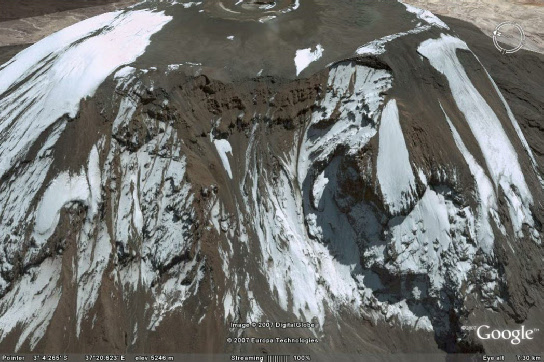 Prior to what appears to have become an increased rate of de-glaciation on the Western Breach and the resultant increased incidence of rockfall, climbers would often combine the Western Breach with the Lemosho or Machame Routes in order to gain access to the crater, from where dramatic and fascinating excursions to the Reusch Ash Pit and Northern and Eastern Ice Fields can be launched. Climbers should however be aware that it is not necessary to assault via the Western Breach in order to spend a night in the crater and that this option is easily and considerably more safely available on the following routes when assaulting via Barafu or School Hut. 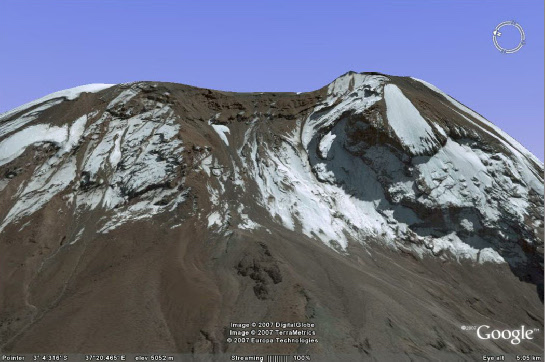 While we feel unable to recommend the Western Breach as a safe ascent route to the summit it is recognised that the nature of adventurous expeditions to hostile wilderness environments is such that a number of climbers, despite familiarising themselves with the contents of this website, will nonetheless continue to opt to attempt to summit Kilimanjaro via the Western Breach assault route. Where this choice is made, we would request that climbers ensure that all published material pertaining to the route be carefully considered and that the accident investigation report be read thoroughly. Once a climber is able to satisfy us that they understand the substantially elevated level of risk to which they are knowingly and willingly proposing that they subject themselves, we are on hand to offer full and unreserved logistical support, preparatory advice, and leadership. 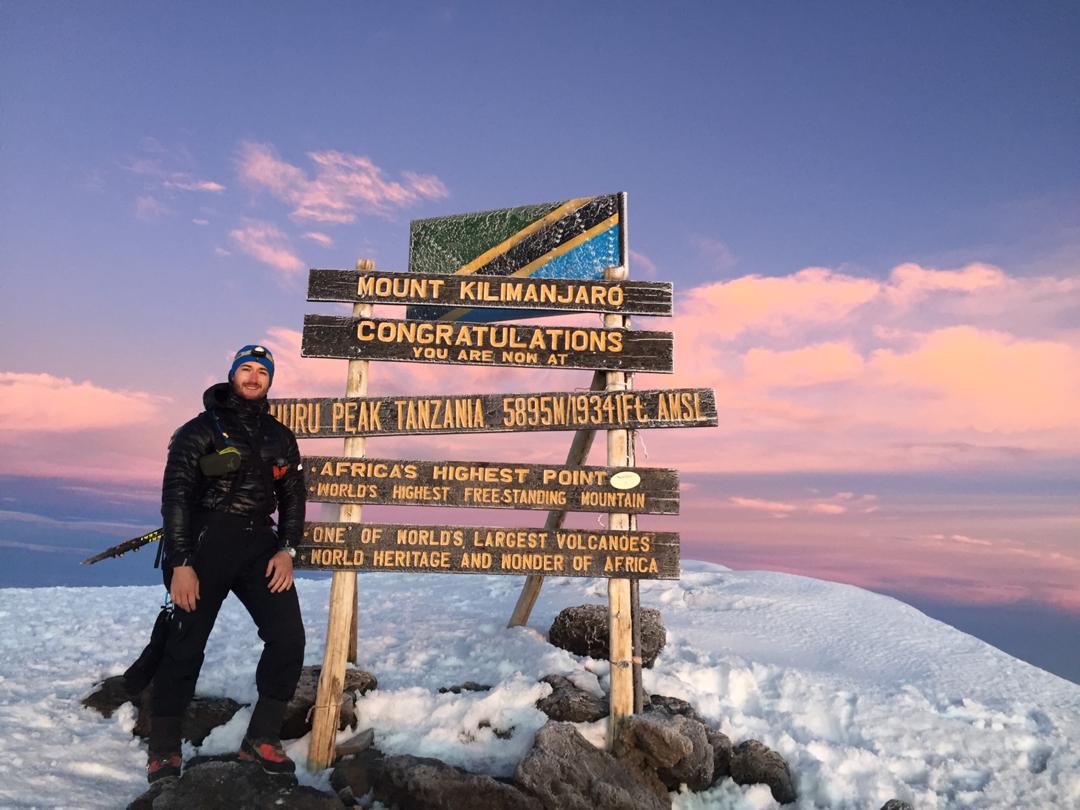 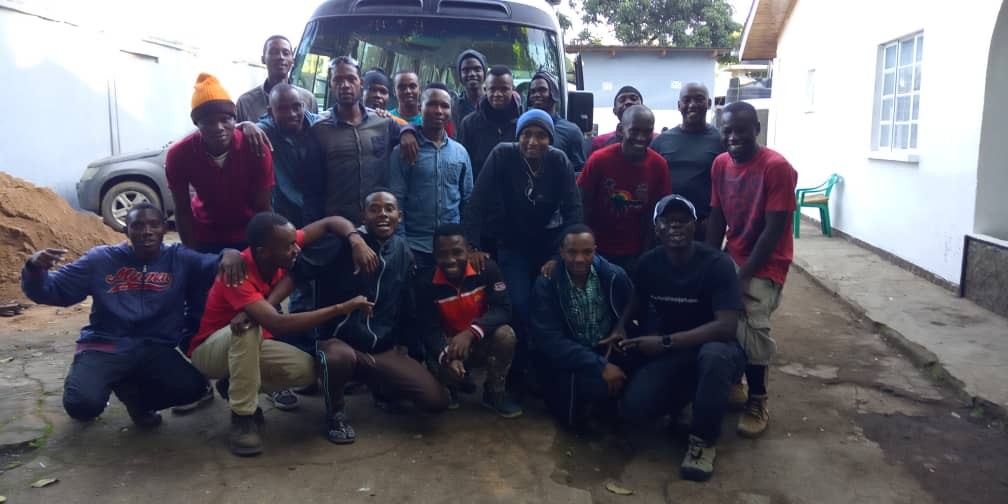